In this guide, we are going to give you the general idea regarding building the best possible PvE and PvP army compositions in Warpath.

There are 150 Warpath units right now and building the most effective combat composition from them is not easy at all. Hopefully, after reading this guide, you build up your own team with ease! 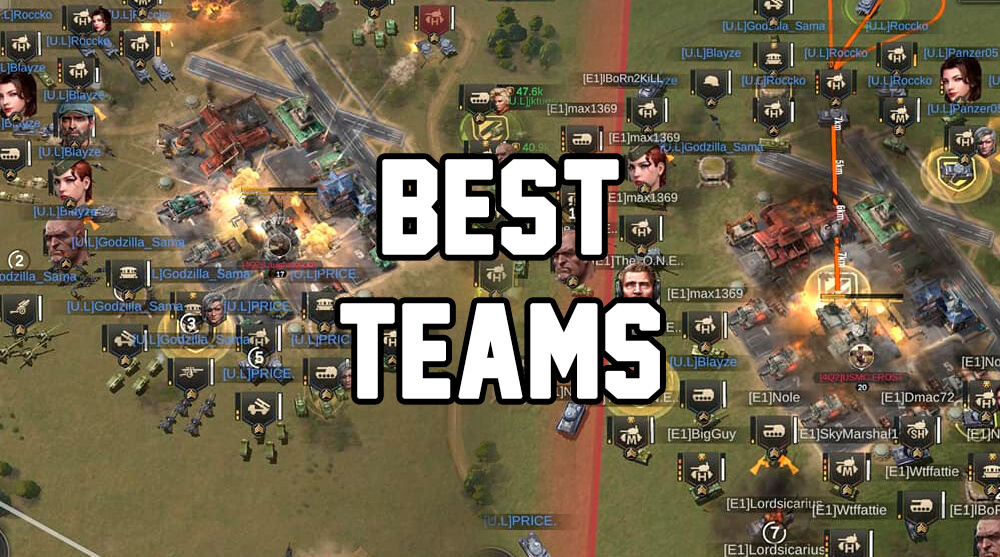 During the early game, most units work fine for army setup!

Simply just use your strongest units and remember only use the safe green Assemble Units button. Never sacrifice the units that you don’t know about because they could be very strong units later in the game.

After that, you will want to have 1-2 Artillery units in your army when you are getting more into PvP battles.

Infantry units are great for the Campaign. They are excellent at taking damage and protecting your other units.

At the moment, there are a lot of commanders evolving around infantry units so it’s a loss if you don’t have at least an infantry army in your team. At level 20, if you have 2 Infantry units in your army setup, you can easily solo the Raven Bunker level 3 without any issue at all and can get to the max possible level of Campaign.

Only sacrifice units once you’ve started learning more about the game and know which are the best units to focus on in the long run.

In the mid game, It’s recommended to use different types of units in your team in the late game for different situations. At level 30, I am using Medium Tank, Heavy Tank, Tank Hunter, Anti-Tank, and Artillery unit in my Army!

At this point, when you have T5 units and you cannot level up all of your units, you will need to make choices regarding the top tier units to use. This also depends a bit on your luck when drawing cards! 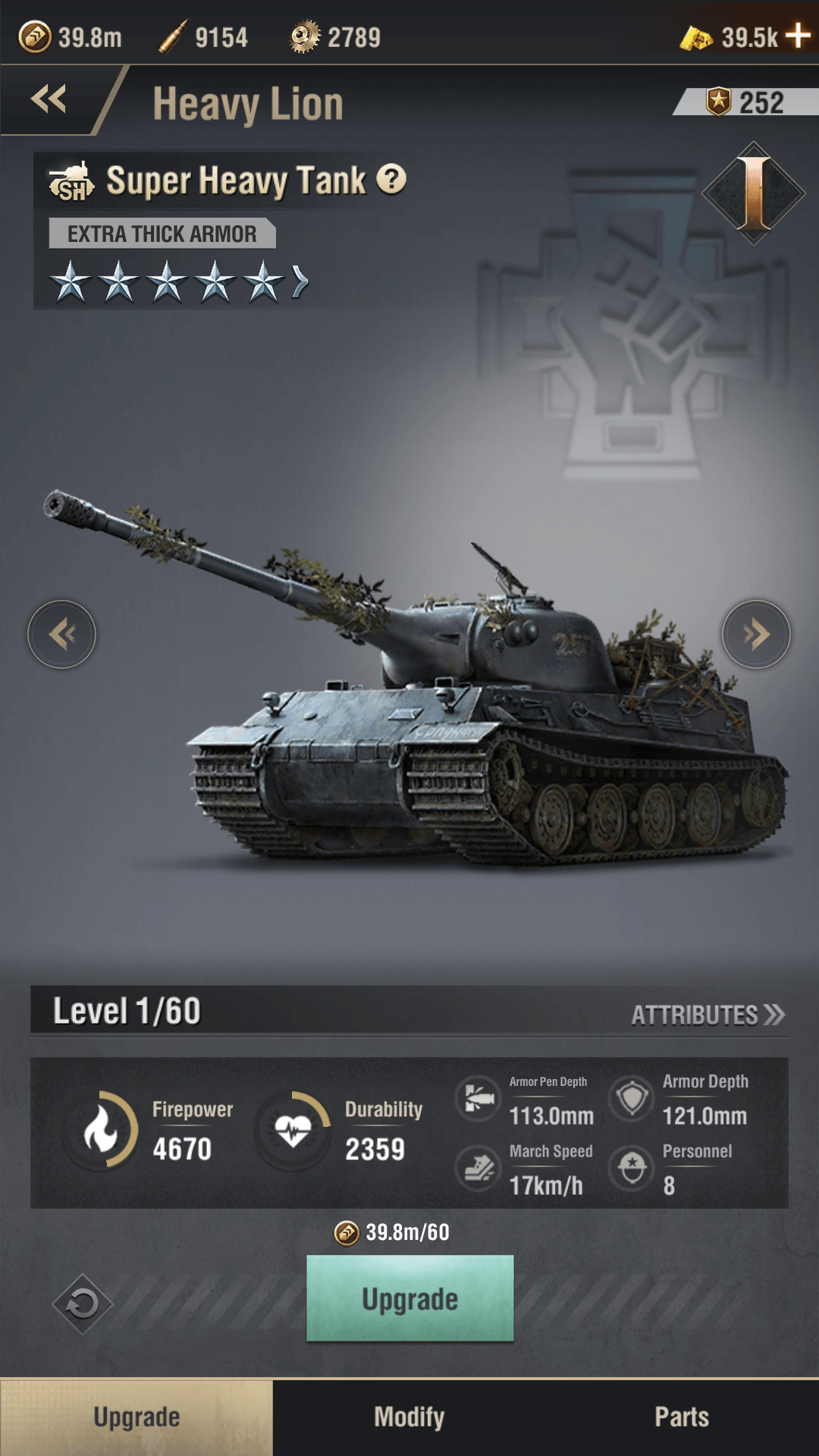 Note that Lion is one of the rarest tanks in the game because there isn’t any level 4 Lion. Always keep it and never use it to upgrade any other unit! It’s a beast in your late-game team composition!

Pushing higher in the campaign is very important because it gives you better passive rewards overtime, containing the unit’s EXP, ammunition, and materials for unit upgrades.

The higher you push in the Campaign, the more benefits you get in the long-term.

Never skip this if you don’t want to have troubles in the game later on.

During the early game, most campaign missions are quite easy. Just have 1 strong infantry unit in your team to tank for other units and you will be golden.

The keys things you want to remember are:

If you don’t have any strong infantry unit ready, Super Heavy Tank or Heavy Tank can soak damage quite well but not good as the infantry. It’s also quite expensive to invest on the during the early game.

Depending on the campaign mission you are at, the army setup might vary. This is because the enemy army formations are different in each mission. Thus, you want to change some units in your team accordingly.

You generally don’t need to care much about the differences between the unit camps here. Simply use the best ones you have!

How to use Campaign Team Formations

This is an open-field strategic video game, where you are staying on the map with quite a lot of players, you just cannot survive if you don’t know how to communicate with other players.

You want to be in an Alliance and want to have a specific role on the battlefield when there are wars.

There are a lot of roles but let’s just discuss the following ones in this guide to make it simple:

Each role requires a different unit setup and different objectives and targets.

The table below shows basically how the troop counter system in Warpath works.

Base-to-base is a very important strategy for the mid to late stage of Warpath. Base-to-Base is only effective when you can get your base close to the enemy base.

The ideal units for B2B battles are

If you don’t have Tiger or Lion, consider using Valentine or Churchill. They don’t have a lot of armor, which is crucial for this strategy, however, they have the 300% damage bonus against structures in the game.

How to use Base-to-Base Team Formations:

Tank Hunter role is a must-have role in any open-field combat where your main job is to deal with the enemy tanks.

In order to deal with the Super-Heavy tanks, 2-3

Anti-tank Guns and the rest contains

Medium Tanks to protect your Anti-Tank Guns from the enemy Light Tanks and Tank Hunters.

If your target doesn’t have any Super-Heavy Tanks but has Heavy Tanks, use

Tank Hunters in your team formation!

If your target has Tank Hunters and Medium Tanks, you can use

How to use Tank Hunter Formations:

The main job of the Sniper is to destroy the glass cannons in the enemy formation as quickly as possible.

This role requires a lot of practice. It doesn’t work well in long fights. It’s better to recall your troops and retreat frequently whenever needed.

The best choice for the Sniper role is

Light Tanks as they have great speed and good attack range for the cost of durability and armor.

Just a few hits towards the enemy Artillery units then retreat and you will be golden!

Because we all don’t want to invest everything we have into a lot of Light Tanks, it’s best to have some other high-speed units in your army composition, such as

How to use Tank Hunter Team Formations

Rear Protector protects your weakest units in the formation. They are the direct counter to the Snipers or Flankers.

Medium tanks are a direct counter to Light Tanks and tank Hunters. Since you don’t want to invest a lot of resources on 5 Medium tanks, you want to use also Tank Hunters and

Heavy Tanks in your team setup.

Soviet Medium Tanks are great for Rearguards since they have self-healing ability.

If you want to use Heavy tanks, Vanguard and Soviet tanks are all great. KV/IS is better in offense and Tiger is better in defense.

How to use Rear Protector Team Formation:

This is the best stategy whenever your alliance territory get an unexpected strike from the enemies.

Doing this strategy, you need to airlift your base right onto their armies. Don’t be scared because if you have the right team setup in your hands.

Most of the time, you will see enemies using Super Heavy Tanks, Heavy Tanks, or even Infantry protecting their siege units when raiding your bases.

Thus, you want to use

Howitzers being protected by

Medium Tanks to deal with the enemies.

Usually, this strategy is best for players having high level base to be able to soak as much damage as possible.

How to use Garrison Teams:

Hopefully, after reading this guide, you can easily build up your own Warpath team formations with the best possible army setups in different situations of the game.

Don’t hesitate to comment down below if you have any question regarding building armies in the game!

Warpath has just introduced the very first Warpath Battle Pass to all players in the game. People now can complete...
Read
Guides

Here are the best Warpath tips and advice we want to give for new players to have a better start...
Read
Subscribe
Login
0 Comments
Inline Feedbacks
View all comments